What’s on your plate?

Having acne can be very annoying but figuring out what helps against it may be as well. Some sites say you can fix it with creams or by cleaning the skin every day, others claim that stopping eating chocolate or drinking cola helps. Researcher Frederica Dall’Oglio and her team, in 2021, lined up years of research on the relationship between diet and acne. As it turns out, the skin may be a mirror of your nutrition. 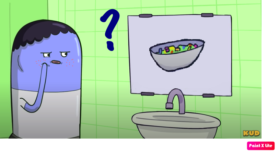 Acne is a skin condition where sebaceous glands become accumulated due to various processes in the body and skin. That manifests itself as pimples. Acne occurs to a greater or lesser extent in about 80 percent of young people between 12 and 18 years old. The people who seek help from a dermatologist are on average 24 years old and mainly women.

The more severe the acne, the more boys and girls experience a negative influence. For example, it can cause shame and insecurity, but also painful skin and sleeping problems. More and more research is being done into the causes of acne, as it can be very annoying for some young people (and adults too) and reduce the quality of life.

In addition to risk factors such as family history, age, BMI, lifestyle and skin type, diet plays an important role in the development and severity of acne. In a recently released study, Frederica Dall’Oglio and her team gathered evidence from studies about the effects of different foods on acne.

Foods with a high glycemic index (GI) contain carbohydrates that are quickly digested into sugars. Fast sugars such as white bread, “Coco pops” and chips. A diet with these fast sugars has a negative effect on acne compared to foods with slow sugars, such as most vegetables, fruits and whole grains. How did that happen?

Foods with fast sugars ensure that more of the growth hormone IGF-1 is produced. In the skin, this hormone can cause a buildup of dead skin cells, which leads to blockage of the sebaceous glands.

In addition, these foods can also cause an increase in the hormone androgen. This increase leads to the production of sebum, which also negatively affects acne.

Several studies have indicated that consuming at least two milk products (milk, yogurt, cheese, etc.) per week can cause or worsen acne. The hormones in milk in particular cause acne. You might think that fats also play a big role, but also low-fat / fat-free milk (which does contain the hormones) also cause acne, according to the research.

All studies on diet and acne show that eating fatty foods daily can cause acne. Fatty food is often fried or oily, fast food, meat, or mainly saturated and trans fatty acids. 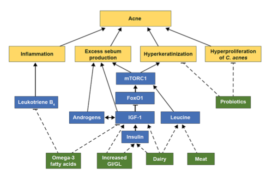 Eating fruits and vegetables at least three times a week has a protective role for acne. This is due to the anti-inflammatory effect of these foods on the skin.

In addition to regular fruit and vegetables, white fish and blue tuna have been shown to have a positive effect on acne, probably due to the important omega-3 fats that can reduce skin inflammation. However, more research is needed to confirm this.

Mick, my brother, told me how he experienced his acne, why he changed his diet, what helped and how long it lasted. He developed acne on his cheeks around the age of twelve. “I didn’t mind very much; it was actually almost a kind of shield that I could put on so that I wouldn’t have to belong to the ‘handsome’ people.”

He was done with it around the age of fifteen and started researching what he could do. “I read somewhere that pork could cause pimples, so I didn’t eat it for about two months.” When that didn’t help, he replaced all milk products with plant-based products. A month later he already saw results. Fifteen years later, he still doesn’t eat dairy products to avoid the development of pimples.

Justus, my roommate Storm’s brother, now knows that pork causes him pimples. He still has to pay attention to this (in his 30th year of life) “After three days of eating a lot of pork and other greasy meat, I immediately notice it on my skin”. Storm has not yet found out what the cause is of his acne or whether it is due to his diet.

To conclude, it differs per person which foods are mainly responsible for acne. In addition to nutrition, other risk factors also play a role. However, with conscious dietary changes and patience, it is possible to reduce acne symptoms.