Genetically modified cells, brains on chips or nanotechnology: these are just a few examples of ways that are used in movies and books to immortalize characters. But what about in real life? Advances in science are booming and recent breakthroughs in medicine and technology have narrowed the gap between science and science fiction than ever before. Still, there is a good chance that this technology will come too late for us. Our only chance for immortality therefore seems to be based on the principle of cryonism: freezing your body after you die in the hope that future technology can bring you back to life. But is this strategy realistic? In any case, scientists still see major challenges.

What if we simply wait? Wait for the time when all secrets of life are solved and no one is sick or dies anymore? This thought arose in the last century among scientists interested in immortality. They not only relied on stories from books, but also on a natural phenomenon. The recent winter weather also showed us that some insects have already mastered such a mechanism. They allow themselves to be frozen in the winter until warmer weather arrives in which they can survive again. 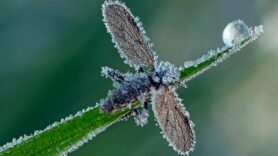 Can we not use the very same principle and let ourselves be frozen after we die, so that we may be brought back to life in the future? In a frozen state, the processes that normally break down your body after you die are stopped. So in principle you could be preserved for a long time. Yet it is not that simple. These insects make a special substance, glycerol, that prevents the formation of ice. So they make some kind of their own antifreeze so that they don’t freeze in those low temperatures. We humans do not have such a thing of course and when freezing ice crystals form, which can seriously damage the tissues and organs. Without special treatment against ice crystal formation, freezing your body after you die would therefore do more harm than good.

Still, there are people who think you can get around this problem and want to be frozen after they die. By having your body, especially your brain, treated after your death with certain substances that fix your tissues and prevent ice crystal formation, they believe that the damage from freezing remains limited. Recently published studies show that in this way you can indeed reasonably well keep the brain structure of, for example, a rabbit or rat intact. Others, on the other hand, argue that they have never been able to demonstrate this in humans. Of course, they also cannot thaw the currently frozen bodies to see if they are still in good condition. Therefore, the question remains whether this hope is well-founded and whether cryonism is a realistic strategy for immortality. After all, we have not yet succeeded in bringing the mummies from Egypt – well preserved for their time – back to life. 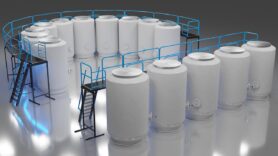 A cryonics institute. Several bodies that are kept at the right temperature with liquid nitrogen can fit in one vessel. (credit: Pixabay)

To find out what the state of science is like, I spoke with a number of researchers working in different areas within the life sciences about the main challenges surrounding cryonism. This is also the case with Bob Coelingh, who uses cryo-electron microscopy in his research on virus proteins. With this technique, proteins or cells can be frozen at extremely low temperatures without crystal formation. This is called vitrification. Afterwards, the cells can be viewed in their natural state with electron microscopy. Yet this is not so easy with a whole body. “I see the main problem in the size of your body. For samples thicker than half a micrometer, high-pressure freezing already has to take place, and then the maximum thickness is only a few micrometers to achieve vitrification.”

Keeping a whole body intact and freezing like the small samples in cryo-electron microscopy is therefore not feasible. The goal of cryonists is therefore to limit damage from the freezing process as much as possible. Kes Kloosterhuis, neurobiologist, emphasizes the importance of this. “The brain in particular consists of many different types of specialized cells and many of these cells no longer contain stem cells. This means that when some of these cells die during freezing and thawing, these cells are difficult to replace with new cells. Even with futuristic stem cell technology, the problem remains that you will never be able to restore your memory when its brain structures are damaged. ”

Fleur van Oosterom, a researcher in the field of viruses and the immune system, is also not very optimistic about cryonics. “Even if in the future science is ready to cure the most common causes of death, great risks remain. For example, your own immune system is not at all adapted to any new viruses or other pathogens. It would be a shame to be brought back to life and then die from an equivalent of a cold, the flu or, say, corona. In addition, it entails risks for future generations. What if we carry a disease with us that will be extinct by then and to which the population is no longer immune to? That could lead to a pandemic. Altogether, this is only justified if they can really cure all diseases. And we are far from being there yet. ”

In short, current science sees a lot of problems to be solved before cryopreservation can be seen as a realistic option to immortality. For the time being, the ideas about immortality through cryopreservation will therefore remain science fiction. Just as we can only bring mummies back to life in books and movies, future generations may never revive our frozen contemporaries. Yet this is no reason for cryonists to put their plans on hold. They hold the hope that future technologies can overcome these obstacles. After all, if you told people a thousand years ago what science is now capable of, they would also tell you to stick to fiction.