How small can we go?

Today, April 14, is National Poop Day. This was created by the Gastrointestinal Foundation to explain the important relationship between your poop and your health. Everyone poops. And while you may think it’s dirty brown goo, it contains tremendously valuable information about your health. Your poop contains a lot of microorganisms, such as bacteria. These are not just bad, as is sometimes thought, but are actually vital! For many diseases, an imbalance of these bacteria is (one of) the causes. Poop transplants, using poop and thus bacteria from healthy people, can even be very valuable. Max Nieuwdorp is working on poop transplants in diabetes. Last October, he and his colleagues published a study showing that poop from healthy people can stabilize type 1 diabetes in patients. This means that these patients need to inject less insulin, which can make life a little easier. In this article you can read more about this very special, new treatment. 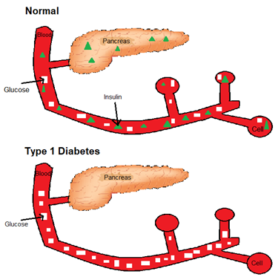 Figure 1: Without insulin, glucose is not absorbed by your cells and remains in your blood

In type 1 diabetes the insulin-producing cells of the pancreas are attacked by the body’s own immune system. As a result, the body can no longer produce its own insulin. Without insulin, the glucose from your blood cannot be absorbed into your cells and your blood sugar levels remain much too high. You can also see this in Figure 1. A patient has to calculate with everything he or she eats how much insulin he or she has to inject extra to keep the blood sugar level in balance. Because if this becomes too high or too low it will cause unpleasant symptoms such as dizziness or nausea and vomiting. As you can imagine, it is very drastic on one’s life to have to think so much every day at every meal. Max has many people on both sides of his family who suffer from this disease, which is why he decided during his medical studies that he wanted to learn more about it and do research.

Max explains that before he started his research it was already known that type 1 diabetes (like many other autoimmune diseases) probably originates in the intestines. This is because this is where the immune system is trained by all the bacteria that are abundant here. These bacteria also come out in your poop. His idea was to use poop transplants to get the good bacteria that patients with diabetes lack back through poop from the healthy donor. To do this, fresh poop is first mixed with water and filtered so that only the bacteria remain. This mixture is then introduced directly into the small intestine with a syringe through a tube in the nose and through the stomach. The syringe is shown in figure 2.

After transplantation, the good bacteria can make the immune system less aggressive against its own body because the immune system is trained differently. This new therapy appears to work well. Patients treated with it retain the function of insulin-producing cells in the pancreas. This has of course been investigated clinically, but Max says that patients themselves also noticed that they had to inject insulin less often.

Poop transplants are currently already used in practice to combat Clostridium difficile infections. These bacteria often do not respond to antibiotics that would normally kill them. A last resort is then a poop transplant to let the good bacteria from a donor regain the upper hand. In diabetes, however, there is another major drawback to this therapy. It works, but has to be repeated every 8 weeks to continue to have an effect. In the long term, therefore, another way will have to be found to get the bacteria into the intestine. Because a tube through your nose to your intestines is not exactly pleasant, Max can tell you from experience. Type 1 diabetes often develops early in life, somewhere between the 8th and 30th year of life. For children, a poop transplant is far too radical and therefore not done before the age of 18. For a solution to this problem Max himself is thinking of developing capsules in which the good bacteria can be transported to your intestines. It is very important that the bacteria in the stomach are well protected, otherwise they will die, because that is one of the functions of your stomach.

The study that has now been published was only a first study with 20 patients. According to Max it will take at least 5-10 years before this research is translated into a treatment for patients. His ideal vision of the future is that in 5-10 years’ time children can be screened for their risk of developing diabetes. Children with a high risk of developing diabetes can then be closely monitored and if they develop diabetes, treatment can be provided early on. That treatment would ideally be very personalized. The stool should then be screened to see which bacteria are specifically missing from each patient. Those specific bacteria could then be introduced in pill form to inhibit diabetes and maintain their own insulin production as much as possible. There is still much to be done to achieve this, but Max said, “If we can do it in the world, we can do it in the Netherlands.”

So it will take some time, but a good step has been taken toward a maintenance treatment for type 1 diabetes. A study like this involves many things, mainly in the biology direction. Max is a professor of internal medicine, but it also involves a lot of microbiology, pharmacy and immunology. So with different courses you can end up in the same place.

481 Responses to “Treating diabetes with poop”