Flip-flops are forever! Or are they not?

The myth of biodegradability

Flip-flops are the most popular shoes in the world. Who doesn’t own a pair? But scientists at the University of California in San Diego are now especially excited about a new pair of commercial-quality flip-flops they have created. What is all the fuzz about? The clue lies in the material of the sandals. The sole is made from algae and is said to degrade in the natural environment. Nowadays, there are more and more products on our supermarket shelves claiming to be “biodegradable” and scientists are eager to develop new materials. The idea that available plastics degrade in nature without leaving a trace is a myth, however. At least today.

From the beaches of Scheveningen to the pedestrian zone of Amsterdam in summer: flip-flops are everywhere. Globally, these shoes account for a considerable amount of plastic trash, which enters our oceans every year. There it causes an environmental disaster. The social project Ocean Sole alone has recycled 750,000 flip-flops washed up at the shores of Kenya this year. Science and industry are reacting by producing plastics alternatives. They label some of them bio(logically)-degradable. The idea is that microorganisms in our environment feed on the material and quickly and completely turn it into natural substances like water, CO2 or compost.

Unfortunately, most of todays’ “biodegradable” products do not live up to this sweet promise. We see this in a 2019 experiment. Researchers from the English University of Plymouth tested three types of plastic bags marked “biodegradable”. They exposed the bags to environmental conditions in which plastics usually ends up. Only one compost bag dissolved in sea water. After three years, the researchers could have still used many of the bags to carry their groceries home.

Too slow, too picky, too toxic?

We see that “biodegradable” plastic might dissolve. But it takes long. Three years seem lengthy already. But there are reports of “biodegradable” material surviving in the oceans for at least 25 years. In the meantime, it causes a lot of harm: Toxic substances are released, animals get caught and strangled in plastics or they eat micro particles of it. But how fast a degradation would be fast enough? 4 months, as in the case of the San Diego algae flip-flops? That’s difficult to answer but all current “biodegradable plastics” seem to be too slow to earn the title “eco-friendly”.

The Plymouth study reveals a second problem: Some biodegradable materials like the compost bag disappear but only in a limited number of specific environments. You never know where exactly the plastic will end up and today’s materials will not degrade in most of the probable environments. Why? Consider oceans alone and you will find very different conditions in different places: warm beaches with bright sunlight, the windy open sea, the dark and ice-cold deep sea. UV rays, temperature and wave movement influence degradation. The different climates also support many distinct lifeforms, microbes being one of them. The microbes are different and so is their ability of what they can degrade and how fast.

Many people forget that there are more problems to plastics than just its mass. Lisa Zimmermann is a toxicologist at Goethe University Frankfurt in Germany. She and her team examine how harmful the substances contained in conventional plastics and their alternatives are. “Two-thirds of all plastics we tested in our lab contained a large amount of chemicals, regardless of whether the plastic was conventional, biobased or biodegradable. In the test, many of these chemicals were toxic to cells”, she reports. While some of the substances were already known to be dangerous for humans and other lifeforms, others could not even be identified by the scientists. “The label “bio” does not automatically mean that the material is safer”, Lisa Zimmermann concludes. 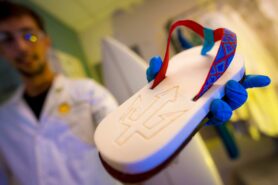 In the case of the algae flip-flop, 52% of the shoe is made from biodegradable material. This half of the shoe degrades in soil and compost within a few months, but not in sea water. So how useful is the flip-flop really? And how much sense would a flip-flop make which actually degrades when it’s exposed to water for too long? The general problem with biodegradability is that you are trying to find a material which is long-lasting and stable throughout its use but quickly degrades at the end of its life. One idea to overcome this problem would be to integrate a sort of switch on the molecular level of a material which causes it to automatically biodegrade in a given environment when needed. “We are very far from such a solution”, says Lisa Zimmermann.

Scientists are not blind to these issues. They are investigating many ideas to make fast and complete biodegradability possible. In this search, one bacterium made their hearts beat faster when it was discovered in 2016: Ideonella sakaiensis was the first natural microorganism discovered to decompose plastic. Researchers have recently managed to improve the bacteria’s speed of degrading by 6 times. In the case of the algae flip-flops, the San Diego scientists grew algae in ponds, sucked the water out of the plants and extracted oils from the paste. These formed the basis for a polymer. Most plastics are made of polymers, which are long and complex chains of thousands of atoms. 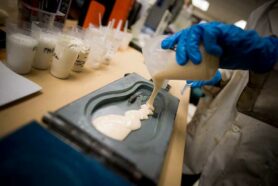 Despite these efforts, today flip-flops don’t just disappear. While research for less harmful materials continues, we are still releasing avalanches of plastic into our soils and waters. The real problem as well as its solution might not lie in the material itself. “There are niches where having a working biodegradable material would make sense. For instance, for fisher nets where we cannot avoid pollution”, Lisa Zimmermann states. “But generally we should ask ourselves: how useful is biodegradability? Shouldn’t we rather make sure it doesn’t get into nature?” The expert calls for a change of mindset and lifestyle: Reduce, reuse, recycle!