If you look at a beetle long enough, you will recognize a robot

Electric robot animals can be found everywhere, and they come in all shapes and sizes. There are robotic animals such as a robotic dog, cat, seal, monkey, or dinosaur. Robot animals now mainly serve as pets for people at home or for lonely and anxious people in the hospital or retirement home. Future robotic animals could track down drugs, fish plastic from the sea or even investigate the moon. Yet robotic animals are more complicated than you might think.

Engineers who develop robotic animals take inspiration from the animal world. Engineers study animals very well to make the robotic animals as good and efficient as possible. For example, Engineer Chris Verhoeven of TU Delft came up with the idea of ​​robot beetles when he was studying beetles in Blijdorp (1). He thinks robotic animals are so much like animals that robotic animals could even be called a new species called electroids (1).

Robot animals are so similar to animals because they are both autonomous. This means that they can independently perceive their environment, can move, and survive (1). For example, a robot dog can walk around, bark, give you cups and play with a ball. When its battery is low, it goes to its charging station itself, just like a dog would lie down in its basket when it is tired. Check this videolink if you want to see robot dog AIBO come to life: https://youtu.be/5ifwGc-0mAY 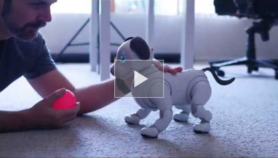 Image of video of AIBO the robot dog

Robot animals have many advantages over other pets. While pets do not always listen to their owners, a robotic pet will. Furthermore, robot pets will not run away, startle or show other unpredictable behavior. For example, a robot dog will not bite other people, but will only make a growl sound. Other advantages of robotic animals are that they are patient, allergy free and that you do not have to give them food or drink like other pets. This way everyone can have robot pets at home that last a long time and do what you want.

Retirement homes and hospitals already use robotic animals as pets. They provide comfort, relaxation, and pleasure. Robot seal PARO ensures a better mood, less stress, fear, and pain. That is why some people with dementia in the retirement home get PARO as pets, because they quickly forget things and are anxious, depressed, and lonely (2). In this way, PARO can really help some demented grandparents and grandmothers who suffer from it. Furthermore, PARO also helps in the hospital to reduce stress, anxiety and pain in children who are being treated there (3). See how PARO helps people with dementia with this link: https://www.cnbc.com/video/2018/10/02/robotic-therapy-seal-paro-is-revolutionizing-elderly-care.html.

To improve robotic animals even more, the very latest robotic animals can even communicate and collaborate with each other. By working and communicating together, robotic animals are smarter together than on their own. This is called collective intelligence and so do animals. Ants communicate with others by secreting dust to build a large nest together, which they could not have done on their own (1). Robot animals can communicate much faster via radio, light or sound than animals. For example, a robot insect can send a radio signal to other robot insects when it smells something (1). In this link Chris Verhoeven explains how robots can communicate with each other https://youtu.be/tNPfD9l14Js

Photo of video about sworm robots and DelFly

Robot animals can move, communicate and respond to the environment because they have a kind of nervous system with senses just like animals (1). They can see, smell, hear and feel with sensors to observe their environment. Each robotic animal must adhere to the rules programmed in its software. It measures something with its sensors, checks if he is not breaking the rule and then executes a command. For example, a robot can smell a fly with a nose with small electrical wires, through which current flows. If a molecule with a certain odor falls on these wires, the resistance in the wire will be lower than the set value. If the robot fly then measures a resistance that is too low, it knows which substance it smells.

Robot animals can not only smell, but also see with cameras as eyes. They can perceive their environment and properly estimate the distance to objects. For example, a robotic animal’s infrared camera can measure how long it takes for infrared light to bounce off an object (4). The longer this takes, the further away something is. This way, a robot animal knows how far the object is and it will not collide. With this system, a robot fly (DelFly) could record a live concert of a festival in the future without flying into the visitors. This videolink also shows how the DelFly can fly, look and what its applications are: https://youtu.be/tNPfD9l14Js

“Electroids (robot animals) are going to change the world,” says Mr Verhoeven (1). There are endless applications of robot animals in society. Mr Verhoeven believes that everyone should think about these applications: “Especially by people who are not like me” (1). That is why he asked primary school children to come up with new applications for robot animals with their imaginations. A 7-year-old student invented a robotic whale that can filter plastic from the ocean by taking bites of water. He can throw up at the port and help recycle plastic. Another student invented a robotic worm that can dig in the desert in search of water. In conjunction with common worms, the soil can then become fertile and food can grow in the desert.

So, see robot animals as real animals and let your imagination run wild just like these kids. Who knows, you might come up with the new robot animal of the future!

Check out our Instagram page for more info on robots https://www.instagram.com/sciencetobe/

61 Responses to “If you look at a beetle long enough, you will recognize a robot”